Losing Faith in the Corporate World

- March 27, 2019
To some companies, an employee should be grateful to have a job at all and to get a salary at the end of the month. But surely employees should expect a bit more from their employer. More and more people are losing faith in the corporate world and looking for freelance work and self-employment opportunities...  But why is that? In my experience, I believe that these are the reasons: Lack of flexibility Companies expect their employees to fit their personal lives around their work commitments. But with young families it is impossible to achieve (sick child, school events, sports club, tutoring, doctor/dentist appointments, school holidays, etc...). If companies offered more flexibility, it would help families achieve better work/life balance. In a world where two parents have to work to make ends meet, companies have the duty to offer more flexibility. It is time for employers to try and meet their employees half way and offer them the flexible/remote working opportunities they
Post a Comment
Read more

- January 24, 2018
So much has happened since my last post in November 2016. It has been absolutely crazy! Just a rollercoaster of emotions really. Things started to deteriorate with our au-pair around Christmas time (2016) and she announced she was leaving us at the beginning of February 2017. Soon after that I was let go by my employer, for reasons I still cannot comprehend. I chose not to take it further, took my pay-out and said goodbye. So just like that, one Friday morning, I became a "stay-at-home" mum. I enjoyed it for a while. It was nice to be able to take Dylan to school, go to playgroups with Ryan, meet up with other mums for coffee... But that did not last. I just became bored. And with so much time on my hands, I started to ruminate about everything that had happened and to feel depressed. I decided to turn this rather unpleasant experience into something positive and began thinking about business ideas. Some were pretty good to be totally honest. However, me not being s
Post a Comment
Read more

The benefits of having an au-pair

- November 11, 2016
Our au pair has been with us for just over two months and our life has changed so much. Mostly for the best but I have to admit it is quite challenging to have an extra person living with us. It takes a little bit of getting used to :).   However the positives outweigh the negatives. There are several benefits of having an au-pair: 1- I can spend more quality time with my husband. We can even go out together (and on our own!) and we don't have to worry about the availability and the cost of a babysitter. Having no family nearby, it is not something that we have done often in 6 years. 2- I have more time for myself. I can go to the gym or go for a quick jog. I can also have a lie-in once in a while, meet with my friends (even if hubby is at work). I have also grown a new passion for grocery shopping. Only kidding! However I must say that grocery shopping without the kids is much more enjoyable (no tears and no tantrum). It is just me, my trolley and my shopping list.
Post a Comment
Read more

20 things I love about the UK and British people 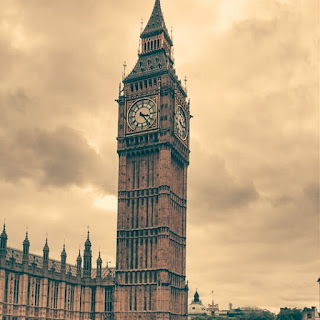 I had a conversation with some British friends the other day. They wanted to know why I chose to live in the UK (and not somewhere warmer for example)? I had never given it much thought before to be honest... So here they are, the 20 reasons why I love the UK so much: 1- This is where I met my husband and where my kids were born Definitely the #1 on my list. 2- Cupcake-obsessed nation I know this is not exclusively British but the UK is where I discovered these lovely little treats. I must say I am addicted too. 2- The countryside Particularly Scotland, Ireland, the Lake District and Kent. I know this would not be most people's favourite holiday destinations but they are for me. Best memories ever! Loch Ness and Travel Teddy 3- Victorian/Georgian houses Although cold and damp (I know for having rented a few), these character houses are absolutely gorgeous. 4-  Galaxy Smooth Milk Chocolate It is so creamy and yummy. Love it! Definitely my favourite
Post a Comment
Read more

Baby shower gift for the dad-to-be

A few weeks ago, I organised a baby shower for my sister-in-law. She is due at the beginning of December. I am going to be the Godmother and I am really chuffed about it. Because all the family was gathered together for the weekend to attend the baby shower, I thought I could organise something for the dad-to-be too (not a baby shower as such, but a few games and a gift). Around dinner time, we played three games: - Blindfolded baby changing game - Pin the dummy in the baby's mouth game - Name that poop game Blindfolded baby changing game The aim of the game is for the dad-to-be to dress a doll. The trick is that he must be blindfolded. It was amusing to watch. Tip: If the parents-to-be are having a baby boy, spray dad's face with water when he is putting the nappy on (use a child's water pistol). He will not expect it! Someone should prepare him for it :). Pin the dummy in the baby's mouth game I don't think that it really needs explaining. T
Post a Comment
Read more

Why not create your child's very own picture book? 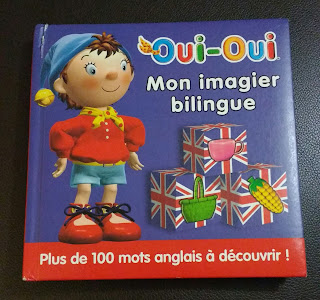 When he was small, Dylan (who is now 6) enjoyed looking at his picture books. His favourite one  was a "Noddy" bilingual picture book.  He would point at the images, wait for me to pronounce the words and then try to repeat the words himself.  The problem with his picture book (actually with most picture books) is that the images are often drawings (rather than photos) and I am not convinced that the little ones always know what they represent (does the mouse on the picture below look like a real mouse? Not really...) Also I find that picture books often cover too many topics (or random topics), instead of focusing on the essential ones (not sure if musical instruments are useful to a toddler who is only starting to talk). This is how the idea came to me to create a picture book for Ryan, my youngest one (who is going to be two next month). It took me about 10-12 hours to put the photo book together (take photos, upload the photos online, organise the
Post a Comment
Read more 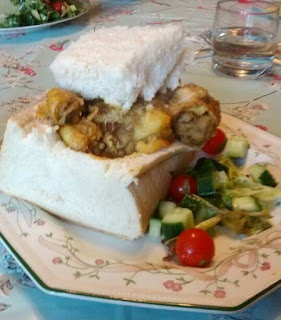 Have you ever heard of Bunny Chow? No? Seriously, you gotta try it at least once!   A Bunny Chow is a South African dish consisting of a hollowed out loaf of bread filled with curry. It originated in the Durban Indian community (East coast).   It can be made with chicken, lamb or even vegetable curry.   It is the equivalent of our kebab here in the UK. It is what you buy on your way home after a night out clubbing (or so I have been told). I love eating with my hands (I love street food in general). You tear the side of the bread bowl and you use it to sccop out the curry filling (as it was a chapati). Yum! I love the chicken curry version (cooked with chicken drumsticks) in a nice crispy bread.   Finger-lickin' good :).
Post a Comment
Read more
More posts